Transitioned A Photographers Vision - part 2 of 1 2 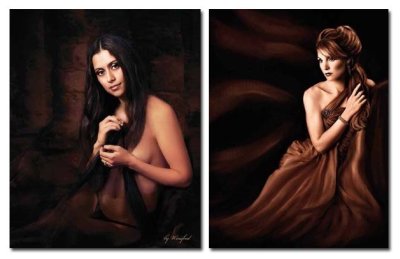 Kimberly arrived with Lynnda, who wore a medium-length wig and round red-rimmed eyeglasses She was tall (about five-ten), slender, and appeared to be in her late forties. I welcomed them both and we went directly to the studio. We would do the 'unveiling' together.

I was right to have prepared myself with electric shears and a razor. When Lynnda pulled off her wig, I could see a nicely shaped head with blotches of hair leftover from the effects of her first two treatments. She said that her head was a little sensitive, so I proceeded carefully. While she and Kimberly chatted away about the theatre and mutual friends, I shaved Lynnda's head with electric shears and then, proceeding slowly with the razor, made her head completely bald.

The hour and a half we spent together, carefully preparing Lynnda's head, was important to the process. She had to get used to her 'new look' - her smooth and shiny, beautifully shaped head. Soon she calmed down sufficiently, and we began to apply her make-up. And then the final touch - long earrings to flatter her long neck (which seemed even longer with her hair gone). I had quite the collection from which she could choose, and together we selected just the right pair. I presented them to her as a gift. Now we were ready to shoot.

I had three backgrounds in mind. The power of symmetry was part of my vision - something I had never considered before. I draped Lynnda in 20 yards of silky sheer-black cloth and, attaching some of the extra cloth to a tall post, created a wing-like appearance. Her arms and hands beneath the cloth, I backlit her. Lynnda began moving her arms and hands symmetrically and gracefully. It was all very beautiful. All was going according to a plan created completely outside of myself.

Eighteen camera shots and three backgrounds later, I knew we were finished. Clearly, the work had been in the vision and the preparation. Tired, Lynnda commented at the end of the shoot that she was so grateful to have this portrait as she transitioned into the next stages of her life experience.

After she and Kimberly left, I immediately reviewed her images. I was pleased to find - though unsurprised - that they were all excellent. I selected the one that possessed the power, presence, and beauty that I had originally envisioned. The word transitioned remained with me as I began the enhancement of her image and watched as Lynnda became a beautiful blue butterfly. Later, I was inspired to create another portrait of her using a different image.

Both of them portray Lynnda, who ultimately lost her left breast, as she sees herself: a strong, beautiful, powerful, sexual woman whose femininity was not lost. A woman transitioned

You can see it in her portraits.

Winifred Whitfield is an artist who has evolved her oil painting skills to embrace the new digital age. She operates out of both New York and Washington State dividing her time between locations to create intimate portraits for women of all ages. 'I am doing what I love to do, 'Winifred says, 'and what I do best.'