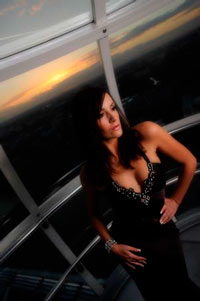 As we started our ascent, everyone got to work. We could see the occupants in the other capsules looking in from all around us - we seemed to have caused quite a stir!

I had allowed the first five minutes for set up, but in fact we were already shooting at 3 minutes 40 seconds. Each pose was to be shot 12 times to make sure a variety of expressions were taken. Katie and I have previously worked together on other shoots, so we knew each other's working style and she has a great understanding of what is required of her - it was pretty much plain sailing with regard to the poses I wanted. We quickly went through Pose 1 and we were on Pose 3 by the time we reached the highest point of the flight. This was where I wanted to shoot the most, as the view from the top, combined with the breathtaking sunset we were blessed with, helped create some spectacular images.

For continuous firing of the flashguns, each of the SB800s was connected to Nikon's SD8A external battery pack. This combines another six AA batteries to the five batteries inside the flashgun. This allowed the guns to match the rapid pace at which I was shooting.

I was shooting with a Nikon D3 and a Nikkor 14-24mm zoom. This is an awesome combination and the results speak for themselves. I can see the 14-24mm lens being constantly attached to one of my D3 bodies - I just love this lens! I was also using the twin CF slots set on back-up mode on the D3 giving complete peace of mind against potential corrupt CF cards, especially on a unique shoot such as this one, where we could not afford to lose any shots.

By the time we reached the top and were starting our descent, we were well ahead of our schedule and I allowed myself the luxury of breathing half a sigh of relief. Getting back to the job in hand, we started on the last two poses. By now the lighting conditions had changed dramatically and we had the sun strongly backlighting the model. A quick adjustment of the ambient light exposure and the flash output was required. The superb large screen on the back of the D3 allows the images to be previewed. Ideally, I would have used the Nikon WT4 wireless transmitter on the D3 and my Apple Mac Book Pro to preview the images in Aperture, but due to the nature of the shoot we decided to keep the equipment list to the bare minimum. Within a couple of test shots, my camera and flash combination was set to the exposure I wanted. A significant advantage of the SB800 remote systems is the speed with which it may be set up and adjusted. 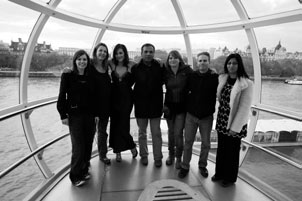 By minute 18, we had pretty much shot all the poses I wanted. The team was allowed to actually enjoy the last couple of minutes of the flight and we even managed a group shot of us all inside the capsule. Then, all too soon, it was time to pack up. Each person knew exactly what they had to do and we were ready to disembark with all kit and equipment safely packed away. The earlier excitement was replaced with euphoria, knowing that the shoot had gone just as we had planned, if not better.

I decided to complete the shoot with some quick shots on ground level, with the London Eye in the background. By now the light had faded rapidly and it was turning bitterly cold and windy. We set up the Speedlights, metered the exposure and took a couple of test shots before getting Katie to pose for the last few shots. The complete process took no more than 10 minutes.

As we all grabbed a quick coffee before heading home, none of us was ashamed to admit that our nerves were stomach churning as we started the shoot, but the feelings were quickly replaced by the need to perform at our absolute best for the next 30 minutes. Everyone left with a real sense of pride and achievement and looking forward to the next such shoot!

I would like to thank Nikon UK for this wonderful experience and their support during this project and to all my team members, without whom this project would not have been possible. Many thanks also go to the staff at the Press Office, London Eye for their co-operation and assistance throughout.