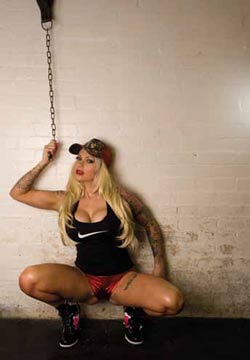 The second gym shoot came about when a model I've worked with before, Tanya Bratz, asked me to shoot some content for her website at the Agila Gym in Billericay, Essex. This was a large gym, so plenty of room for shooting, although we were sharing with the regular clientele and most of the walls were covered in mirrors which brought its own problems.

The first shot from this session is a portrait-style shot of Tanya using one of the gym machines. I used one Quadra head with a soft-box to the left of the camera as the main light and another Quadra head, camera right with a shoot-through umbrella as a fill to give a soft beauty light. A speedlight behind the model, to the right, acts as a hair light. I added a vignette in Photoshop to tone down the background clutter. 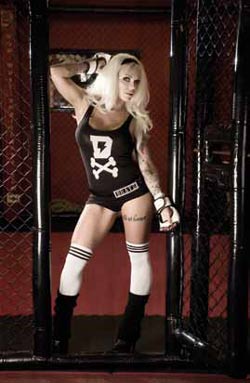 We did a lot of shots of Tanya on machines and lifting weights, but after trying to avoid reflections of equipment and other people (who would keep moving around!) for an hour or so, I eventually had enough of the mirrors and moved to the back of the gym where there was a nice plain white painted brick wall, which could be utilised as a background. Using the soft-box as a main light and the shoot-through umbrella as a fill allowed us to shoot a range of poses against the wall.

A few months on Tanya rang me to say she was going to do a clothing shoot for Dirty Shirty in a gym, and as she'd like the shots we had done before, would I be available to take the photos. So some weeks later I found myself at the Hercules Gym in Colchester, which turned out to be a great place to shoot; as well as the normal gym equipment, they also had a boxing ring and a mixed martial arts cage.

We used the cage for the first shot. Tanya stood in the doorway wearing a black and white vest and white and black MMA gloves. I placed a speedlight inside the cage to act as a rim light and an Elichrom Quadra with soft-box to the left of the camera as the main light. In Adobe camera Raw I upped the exposure to get some detail in the black vest and cage, and slightly de-saturated the reds in the image to make the model's skin look whiter. After a few more shots in the cage and some with punch bags, we moved on to the boxing ring.