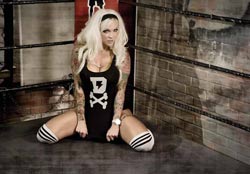 The shot of Tanya kneeling in the ring was lit with a soft-box as a main light and shoot-through umbrella for the fill. A texture layer was overlayed in Photoshop to give the background a dirty, gritty look.

Four large, racing tyres (not quite sure what you do with them in a gym) were used as props for the next shot. For this picture a Quadra with soft-box was placed to the right of the camera for the main light and a second Quadra head with 18 cm reflector and fitted with a red gel on the right of the model put a touch of colour into Tanya's hair and the black tyres, to tie in with the red wall and carpet.

Dirty Shirty is an American company, and so I couldn't resist using a Union flag hanging on the wall as the backdrop for the next photo, the red and blue of the flag complementing the purple T-shirt. We had taken a few shots when a young woman who had been training in the same area of the gym came over and asked if we'd like to borrow her boxing gloves as they were the same purple as the shirt. 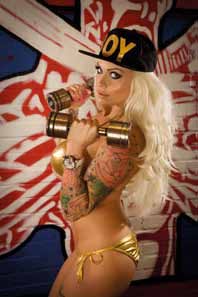 This shot was once again lit using the 40x40cm soft-box and the head with the red gel.

The owners of the gym were letting us shoot there free of charge and had asked if we'd shoot a couple of shots with their logo which was painted on the wall for use on their website/Facebook page, so we obliged doing some shots of Tanya in a gold bikini, looking sexy and pumping iron with a couple of dumbells. I lit this with a softbox to the left of camera as the main light and shoot-though umbrella to the right as a fill, and a speedlight to the right and behind the model as a hair light/rim light kicker to make her stand out from the background.

Since we did the last gym shoot in October 2013, Tanya has moved to Thailand where she is working at a Muay Thai training camp. And me, I've decided maybe I should spend more time in the gym ...with my camera of course!