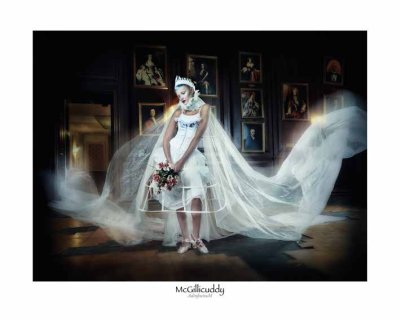 That might all sound very grand and highfalutin, and that might not even be readable in this picture by some, if not many. But that is the concept that enabled us to build the picture. And from the faux crown and the hoop skirt to Zoe’s make-up and the way that Leisa has lavished yards and yards of material to build up a dress, all adds up to realise the original creative thought. The icing on the cake for me was using the Vintage Art

Filter on my PEN-F to add that aged, timed, decayed look.

That original creative idea then expands and generates its own, living momentum. So we took Jess down to a room that clearly is a gallery, but some of the parquet floor is broken and distressed, and we used this as the focal point to position her within the room. The concept behind this was the ghosts of things former, of the balls and the dancing and the fun and the frivolity. To play on the fact that this room must have seen some fantastic parties, but it’s faded and damaged and a little bit sad now - that was the mood we wanted to convey.

Again, the picture started by closing the curtains - because right behind my shooting position was a massive, wall-length window. So I closed all the curtains bar one, which I left half open to add a little bit of fill into the room. Then I metered for the ambient light and shot a couple of shutter speeds above that, which means I get an underexposed picture but I get the radiant warmth of the light fittings that are still there.

The lighting is very simple: it’s two ELBs, one a large strip-box to cameraleft with the outer diffuser taken off to give me a crisper more contrasty light. The other, to camera-right, was a small strip-box with the outer diffuser on, spreading and softening the light a bit more - and it was slightly behind Jess to light through the veil and make it translucent and ghostly. Because of the in-built image stabilisation of my PEN-F, and second-curtain sync, I handheld that at 1/6th of a second - and that slow shutter speed enabled Zoe and Leisa to fluff the material up on my command, me wait for it to fall and make an attractive shape, trigger the shutter and get the motion blur caught in camera.

So the contrast, temperature and shape of the light is all reflective of the qualities that I originally saw in the conceptualisation process which means that I’m not just turning up and taking a picture, I’m turning up and making a picture. I’m building the quality of the light - the brightness, colour, contrast and direction - to make the image that I have in my head become a reality that can be shown to everybody.