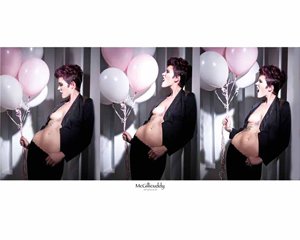 The wider, softer spread of light illuminates Kimberly and the gown more evenly and 'shows off' the dress to the maximum. Being mindful of needing to create specular highlight on Kimberly's skin I've removed the outer diffuser from the strip just to keep the light a little more 'sharp'.

The pose adds attitude and style. A little pro tip is that this image was shot from a kneeling position looking slightly up. This way I am positively using distortion to lengthen the length of the subject's limbs, creating an increased elegant and willowy form. Job done. 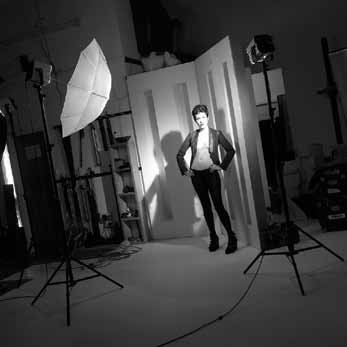 My second subject, Grace was also from Cliche ... the principal there, Melissa, is fab to deal with - the agency comes highly recommended by me - look them up.

The 'Look' my MUA Zoe created for Grace is harder and far more edgy than the style portrayed previously - this image is more about mood, emotion and lifestyle as opposed to a commercial 'sales' image. For me that gives me the 'push' to raise the contrast in my light and 'sharpen' everything up, making things a little crisper in frame.

Once more I'm using a Hedler DF15 as the 'key' but I've given the focusing control a further 'tweak' to spot and pool the light further. Not only does this raise the contrast further but it allows for a little isolation of subject from background as it increases the difference in illumination between the two areas.

Even though this image is about contrast, shadow and shape I have to be mindful that it is printable! In other words I have to control the ratio between shadow and highlight. The modern digital camera can capture many more stops of data than we can print so it's my job to control just where I put my shadow and highlight point within the image and of course this is dependent on the mood, feeling and narrative I'm wishing to create.