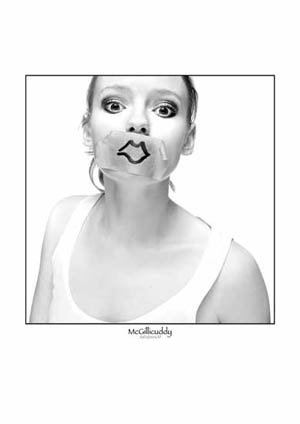 This technique, for want of a better explanation, is like taking two separate images but in the one frame! The camera's shutter speed determines how the ambient light records and the lens aperture controlls the level of supplemental flash light in the image. The reason I'm so fond of 2nd curtain sync is very simple; it enables me to hand hold the camera at much slower speeds than I would normally dare....How? Well, as the shutter is pressed the ambient light is recorded first and just before the shutter closes the flash is triggered, rendering a crisp flash exposure on top of the ambient image giving the illusion of a sharper capture but with a slight feeling of underlying movement from the recorded ambient, clever stuff eh! The in-body image stabilisation didn't hurt either ;0).

The 'key' light was a 19" classic beauty dish positioned to camera left and feathered back across the face of the subject to create depth. The second Nissin had its flash head zoomed to 35mm, placed on its foot and stood on the ground behind the subject and angled to create separation of the primary subject from the background.

Now the second 'trick' employed in this capture was to select a tungsten white balance. This had the effect of rendering the ethereal blue tones we see in the image. Now this in conjunction with the 2nd curtain sync, which by the use of a slow shutter speed, allows the candle flame to record allows it to render as a slightly warm light, casting its glow and 'kissing' part of the subject with its warmth. Further lending to the thought that our subject has ventured out into the 'wild woods' at a time perhaps not appropriate for a young lady!

A long focal length of lens, combined with a shallow depth of field, allows me to isolate the subject and 'stand her off' her surroundings... all simple tricks that, I'm sure you will agree, all combine to make a really compelling image - job done!

The usual contrast and saturation tweaks along with the cloning of unwanted info was carried. In addition a subtle vignette, along with a blur to the edge of the image, was used to further enhance the magical, mythical and mysterious feel to the image...again enhancement not reconstruction!

How was it done?

Charlie Edwards
What was in the bag:

The first and most obvious thing to do in an equipment test is to use the new equipment in a recognised role, so beauty imagery it is then!

However I wanted to give the client something a little out of left field so the 'styling twist' of the hand drawn lips on the sticky tape along with the slightly manic, dramatically urgent pose seemed to fit the bill. Another of those creative instances I find myself thanking my sister for dropping me on my head as a baby ;0)

The subject was lit with my own 36" 'BIG' dish multi modifier, configured in beauty dish mode. This was placed directly in front of the mask of the model's face and about 30 to 35 degrees above the eye line and angled down. The light was placed a good arm's length from the model. In this mode, the highly reflective material of the modifier, gives a beautiful crisp, specular light.