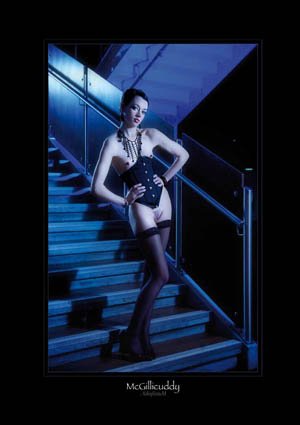 Well my friends it appears congratulations are in order. I obviously didn't put you off enough last issue to stop you wanting to roll with the BIG Dog one more time, so let's go!

You'll remember from the last episode, God, this is starting to sound like an old Flash Gordon re-run, that we were up against it time-wise; three hours to complete three outfits is tough going for a fat, lazy photographer! Fortunately for me I'm smart enough to stack the cards in my favour, so to speak, and have selected the right people to work with in top model and general 'mover and shaker' Miss Laura Oldfield and her fantastic 'Mr fix it' boyfriend, Steve. In fact by the time you read this I'll have taken my own advice and Steve will be the latest addition to the McGillicuddy group.

Ok, so the next image needed to be effective but hopefully a little less complex to achieve. Although speed is of the essence, one thing I'll NEVER compromise is image impact and quality, that's what I'm being paid for!

Having scouted the location previously, I knew I was interested in using the set of stairs that we eventually shot with. From a design point of view the stark lines and angles would beautifully contrast and enhance Ms Oldfield's curves. The fact that the stairs ended in a landing and were, for the main, enclosed by the well was a major bonus. These two architectural features just made my lighting-life a little easier. The landing made it easy for 'key' light placement and the enclosed stairs would make it easier for placement of my 'kicker' light.

The choice of modifier for my 'key' light was simplicity itself. When I need beautiful, sculptural, directional light that is quick and easy to use it really is a 'no brainer' to reach for the bare bulb enhancer from the 'Portaflex' kit from the DMLS lighting modifier range.

This modifier gives a semi-soft, directional light, not dissimilar to a large window facing the sun in the 'golden hour' - powerful, punchy and directional. So one of my X5drs was positioned on the landing, to camera-right, fitted with the aforementioned modifier. The lighting unit was angled in such a way as to allow the light to 'skim' across Lozie, creating highlight and shadow. It should always be in our mind that we are trying to create a 3D feel in a 2D world and on Caucasian skin it's the subtle placement of shadow that will turn this trick for us.

The next light to place, in this cocktail, is what I like to term 'effects lights', or if I'm sitting in my ivory tower thinking what a clever and cool boy I am, an FX light. This unit always adds a little sparkle and polish to the image.

In this Picture's case, it's clamped to the far side of the railing behind the subject, as low as possible. The light has a standard spill kill fitted and is 'gelled up' with a deep blue/violet filter. The light is aimed straight up to colour the otherwise bland and very unexciting underside of the returning stairs, above the subject. The added bonus of the excess spill colouring further areas of the image is simply another card stacked in our favour. This light is running at approximately EV -1 when compared with the key light.