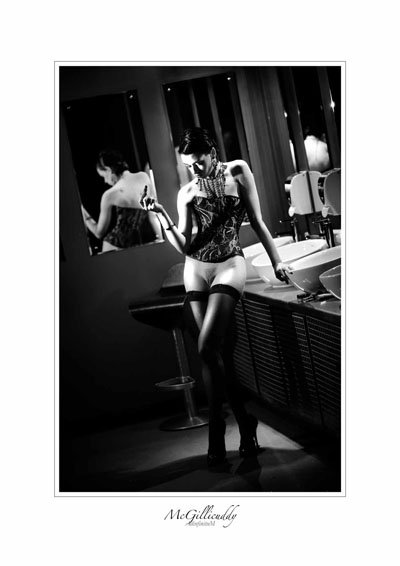 OK this corset shoot is boring even me now, as we laboriously slip into part three! However, I must thank you all for the many, many nice emails and positive PMs requesting more real world 'Hands-on' information.... In truth I'm only finding it tedious because I have many more shoots and LOADS more info I want to share with you, and as a two-fingered, slightly dyslexic typist it really sucks having to hammer away at a keyboard...so let's soldier on and wrap this up so we can roll on.

You may recall that in the previous episode I'd just left Hogwarts on the trail of he who shall not be named and....D'oh, 'Sorry' over active imagination, that's the story of another wizard ;0)

As they say, third time's a charm, so off we go for real! You will remember our brief was to shoot three corsets in cool, sexy, trendy aspirational ways; the advertising strap line, 'Its all that you need' allowed for a little 'Naked' creativity. I'd selected a really fabulous and professional model in Lozie and a 'Cool as' location in Pure, a trendy Manchester drinking and dancing establishment for the très cool and at this point in the story it's two-down, one-to-go and we can see the home straight just ahead.

The third image in the series is a 'Gift' in that it allows me to highlight several underlying points of importance that hopefully will help you see photography through my eyes. I'm well known for banging on about professionalism, preparation and camera craft, ALL hugely important... but never allow them to get in the way of a great image!

OK, let's be clear here, this isn't a 'Get out of jail' card for poor application or execution, the rules are the rules and they are important! However, I like MY rule book to be of the paper-back variety so that on the occasions it's necessary I can roll it up and pop it firmly in my back pocket - you DO need to know just HOW to roll it though, so never underestimate the immense value of core camera craft and knowing the basic rules. I suppose in short what I'm saying is never loose sight of the ethereal 'Creative spark', you never know from when or where it will strike and sticking rigidly to a shooting plan and being inflexible can blinker or even worse, blind you, to exciting opportunities.

On this shoot my 'penny drop' moment came quite literally when I went to 'spend a penny'! As the venue was closed and we were the only people in the joint I headed for the nearest facilities which were the ladies. After getting over the initial shock of how much nicer female loos are compared to the gents I was struck by the recession created by rows of beautiful fitted mirrors...I had to shoot here!

So the moral of the story is...be flexible and open to new shooting opportunities. We simply ripped up our shooting schedule and relocated for a better image.

The only drawback with the location was scale. Although the room was a good 35' long it was barely 8' wide. So lighting placement would need a careful rethink.

The second point this shot illustrates is a gem, 'You don't need the latest and shiniest, most expensive equipment to create a good image'. This picture has the rarest ingredient at the core of its creation...thought!

My key light (my only light!) was the fantastic, ever-ready, Quantum X5dr powered by the dependable Q-xpaq. I attached the large 'Bare bulb' enhancer from the McGillicuddy/DMLS portaflex kit to the flash as my modifier of choice. As you can see from the set-up picture it's extremely slight profile is ideal when the surroundings are tight. The design of the modifier casts the light from the 'Bare bulb' forward to your subject; its quality is similar to direct 'Golden hour' light punching through a window. The otherwise open aspect to the modifier allows some of the flash light output to go 'up and out the sides' to randomly scatter and bounce off walls and ceilings, offering a little degree of fill.