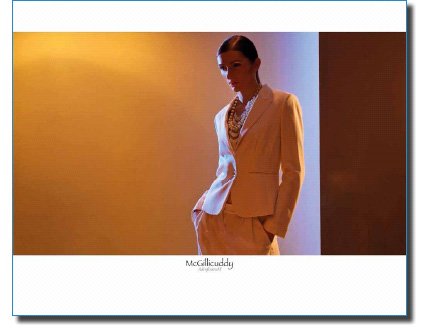 Spatial awareness and painting with strobes This image at first glance may appear deceptively simple... after all it's just two barefaced Olympus FL50r speed lights that have been gelled and slightly modified with the barn door attachment from the McGillicuddy Portaflex kit. This is such a life saving bag of tricks if you don't have one, especially at the price, you are genuinely missing out.

As I've always said, 90% of my work is done way before I ever pick up my OM-D and this image is a really good example of this, the image owes itself to observation and what isn't lit rather than what is!

It's the architectural feature of the curved returning wall that once more makes this shot possible... there's the observation.

I positioned my subject just a little proud of the flat corner at the end of the curves return. Compression from the 45mm disguises the depth of the wall.

My 'key' is the portable flash to camera-left. This Olympus FL50r is fitted with a Colour Temperature Blue gel or CTB. The light is positioned just to feather just an edge of the light past the subject, acting almost just as a 'kicker' to carve the form of the sitter out.

The main mass of the light was left to hit the returning wall behind our model. To protect the background wall from our blue gel a barn door from the Damian Mcgillicuddy 'Portaflex' kit was fitted to shield this area from the light.

My second portable flash once more was the Olympus FL50r. This unit was fitted with a Colour Temperature Orange or CTO gel. It was positioned to camera right and just out of the shot, angled back to skim past Edyeta, offering warm fill to the shadow side and a little accent to the arm nearest the unit - the good old inverse square law in action! My MUA, Zoe's, 'dewey' make up really works a treat here as the eye shadow really sparkles with the light, adding a nice highlight.

The flash was also fitted with a barn door, again from my 'Portaflex' kit, so called because it's PORTable and FLEXable, to protect the end return wall - extreme camera right from any light. Now because of the nature of gels - one of the things we really explore on training workshops, the light carries on past the subject, striking the flat back wall and darkening off as it falls away.

Remember Team McGillicuddy are more than happy to share our tips and tricks, find out what we are up to and what you can join in with at www.damianmcgillicuddy.com