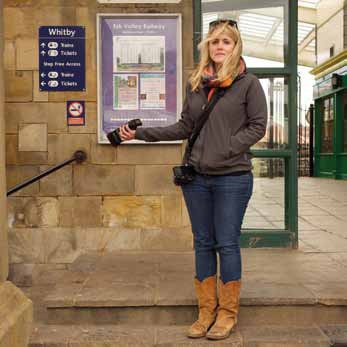 As you can see from my behind-the-scenes image, Steve used one of our Manfrotto baby lightweight stands to boom the dish out, and above, the subject, to create the direction of light needed, removing the sock ups the contrast in the light, giving a crisper image and making it a little more 'sun' like.

To stand Mischkah off the background further I introduced two additional FL50r's into the image and used them as accent lights to separate her and 'carve' her out from the background. You can see from the behind the scenes images that the beauty of speedlights is their size allows them to be placed where other lights simple can't go! The accent light to camera left ran two stops above the key and the speedlight to camera right just the one. 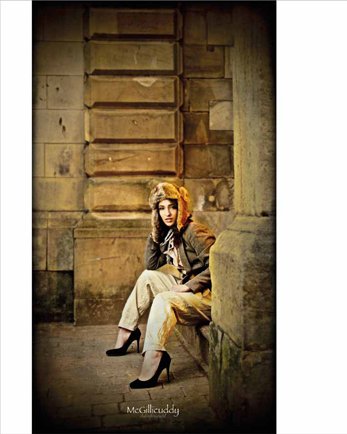 Ok so what about the CTO ( this stands for Colour Temperature Orange) mentioned earlier? By fitting this in front of the key light's flash tube we turn it into a tungsten-balanced light source, ie it's a warm orange in colour when shot at a daylight balanced 5600 degrees kelvin. Now here is the interesting bit. If we manipulate the camera's white balance to believe it is shooting a tungsten light source, in other words to neutralise the orange colour, the daylight and the daylight-balanced flash take on a cooler, bluer, ethereal glow...this is one of my favorite tricks to add impact.

The effect can be dialed up and down as the colour of the light, the degrees Kelvin, is altered on the camera. It's a very effective trick! The image was captured at 1/200 of a second at f9 with the custom white balance temperature set to 3200 degrees kelvin - I shot in the square crop mode so I could maximise every pixel within the composition.