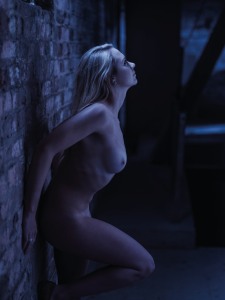 We then went upstairs to the loft where there is minimal lighting coming from a small window and a door at the other end. I've taken this shot many times but this was the first time I was blown away by what I saw on the back of the camera. I boosted the ISO to 800 and shot again at 1/50s f2.8. The first on a cloudy white balance and the second with the Kelvin balance turned down to around 3,850K to give a blue toning to the image. The detail and capture of light and shadow was fabulous giving great depth to the images. IMAGE Above.

The final shot of this set was taken at the opposite end of the loft (IMAGE Below) where natural light filtered through a narrow doorway. Again shot at ISO 800 I love the way the light carved out the detail of Laura's body and the way the Pentax put detail in the highlights and shadows. I shot these using the black and white setting but in post production preferred my usual gradient mapping version and so that's what you see here. When metering an image like this I find spot metering comes into its own as for me it's vital to get the highlights correct and then let the shadows go as deep as they need. I took the reading by filling the frame with the brightest part of Laura's body and then stepping back to compose the image. ISO 800 1/160s f2.8.

By now I was in danger of losing Laura to hypothermia and so it was back to the studio. An Elinchrom ELC 1000w head at half power, fitted with a beauty dish was placed behind me, as far away from Laura as possible. That meant the light falling on her was hard and provided a strong shadow around her body. Shot against a plain white wall it gives the model a lot of space and freedom to move around. It's at this point I ask the subject to rock out, put a piece of music on from their phone and go for it. The sync speed of the Pentax is 1/125s, a little slower than I'm used to but not a problem in the studio. The light metered at f5.6 and proved spot on.