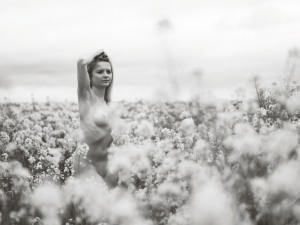 Once we'd got Laura warmed up, it was time to step outside again. The oil seed rape fields were in full bloom and impossible to resist. Usually I shoot these using flash but this time decided to use the available light only and see just how much detail the Pentax captured. With the sun, such as it was, on my back and Laura turned into it I evened out the contrast between land and sky. I still wanted to shoot with narrow depth of field and so retained the 90mm lens at f2.8. That gave a meter reading of 1/500s on Laura's skin producing a little detail in the sky and land. She was very patient whilst I took test shots! One extra piece of kit I would recommend at this stage is the Hoodman Loupe which is brilliant for reviewing images out in the field. You put it over your screen, look through the eyepiece and get a great look at your image without it being blasted by the available light. A simple piece of kit but the best Christmas present I've had in a long time! IMAGE Below. Time to try a different lens and I reached for the widest in the collection. It's 25mm which in SLR terms comes to around 20mm. The widest aperture on that lens is f4 but the sun had come through a little giving me 1/640s to work with. I was in love. The detail captured in the sky was phenomenal giving superb drama to the images. It also proved that Laura, after a recent trip to Tunisia, had the whitest backside in Yorkshire! 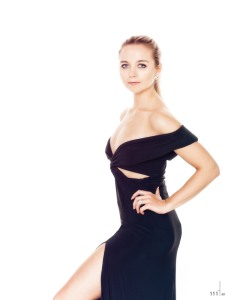 Finally we were back into the studio and using a three-light set-up to produce a white background look. Laura was lit by one ELC head shooting into a seven foot umbrella. Behind Laura on either side of her were Rotaluc strip boxes pointed back at the wall. The light on Laura metered at f5.6, the light on the wall at f9. This was good to produce a white background without blasting light back on to Laura. I shot the images at ISO100 1/125s and f5.6 (IMAGE Right).

Post production of the shoot afterwards was a little slower than normal as Lightroom and Photoshop struggled with the size of the files given my limited computing power. What I did find was that the files required less processing than usual. Noise reduction was not used at all and most times it was a little tweak in contrast and curves. Skin retouching using spot healing tools was much better because of the amount of information recorded. Usually I use frequency separation on skin but found it wasn't required on this shoot.

So what were my findings from this session? The Pentax 645z is indeed an amazing piece of kit. I loved the way it handled, the amount of detail captured, the colour rendition and overall images. I'm really looking forward to putting it into many more situations in the coming months and thank Mark and the Pentax team for lending me the kit. The other finding was that Laura is a great talent in the making and she'll be working with me a lot more in the future.

More images from this shoot are on the blogs www.dentonphotography. blogspot.com and www.dentonnudes.tumblr.com