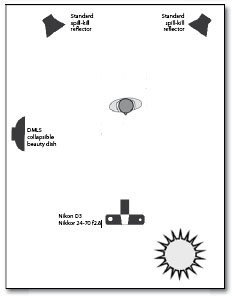 I wanted the concept of easy portability to be paramount in the image; I concluded that the best way of telling this tale was to forego the normal lighting supports and replace them with 'voice activated' alternatives from the crowd.

Equipment wise the shoot was very straightforward. It was captured on my favourite Nikon D3 fitted with the AMAZING 24-70 f2.8 zoomed to about 40 to 50mm - this really is a stellar lens.

From a lighting point of view again it's virtually as simple as it gets. I chose three heads all independently powered by their own packs. Each 'stand' therefore only had to worry about positioning their one light.

The two heads behind the subject were fitted with the standard umbrella 'spill-kills' and were charged with being about 30 degrees to the side of the subject and well behind. I wanted to use these lights to 'Carve out' and separate the subject from the background as well as adding visual interest and narrative to the shot.

The key light was another ranger quadra head teamed with my favourite modifier, the collapsible Damian McGillicuddy/ DMLS beauty dish. Beauty dishes are fab for soft yet strongly directional lighting, I just love them for their sculptural, 3D lighting. Every photographer should have a beauty dish in their arsenal of modifiers...the really cool thing about my beauty dish, other than it folding down to virtually nothing, is that it can, with minimal modification be used with simple speedlites to well... the quadra among many others brands. 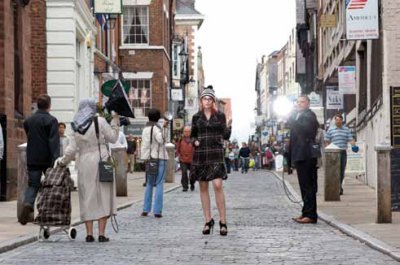 You'll notice that the key light is aimed to 'Skim across' or 'Feather' over the subject; using the edge of the light always promotes a more sculptural, 3D look to the lighting. Always remember we are trying to 'Pass off' the illusion of three dimensions in a two-dimensional medium!

Everything was beautifully synced and triggered with Elinchrom's neat solution in their wireless trigger technology, Skyport. Receivers are already built into the Ranger Quadras battery/command packs along with a simple photo-electric cell, enabling any flash output to trigger the light if Skyport isn't available...so all I had to do was pop the tiny transmitter into my hotshoe and shoot away. The thing I love most about the Skyport set-up is the ability to turn the heads up or down individually, in tenths of a stop, using the transmitter right from the camera position, another fantastic piece of tech that requires me to do less leg work and preserve the old middle age spread!