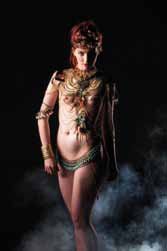 So that's what led to us gathering in a barn on the farm that is my studio. The creative team being my two regular models Nikki, Jennie and me. Jennie had found an image in a magazine to use as inspiration and between her and Nikki come up with ideas as to how she would be made up and styled. We called the concept Goddess as it was a little like an Egyptian Goddess/Warrior Queen in the styling using Jennie's body draped in a variety of jewellery as our subject. In keeping with the jewellery we decided on rich and warm tones for the make-up. A few years ago a shoot like this would have cost a lot to put together but a few pounds spent in supermarkets and bargain clothes stores came up with sack loads of great looking 'bling' to decorate Jennie with.

I wanted a lighting set-up that gave detail to Jennie but didn't light the backdrop, a roll of grey paper on stands, to any great detail. A smoke machine was used to give extra atmosphere. These are great little gadgets and can be purchased cheaply from DJ suppliers. The liquid in them last for ages and is a much worthwhile addition to your kit.

The lighting came from two sources. A 500 watt Elinchrom BRXi to camera-left firing into a 7ft umbrella. This huge light modifier gives a great light to work with and can be picked up cheaply. It was placed slightly behind Jennie then angled back towards camera. Not enough to induce flare but enough to wrap the light around Jennie and fully define her figure and face. By rotating her slightly I could move between split, Rembrandt and Loop lighting patterns on her face. A strip soft-box was fitted to an Elinchrom Quadra, placed on camera-right well behind the subject and angled towards the camera so as to rim light Jennifer's back and not spill onto the background. This light was also important to shine through the smoke and give definition to it. When working with smoke or water it is important to back light it to get best patterns. 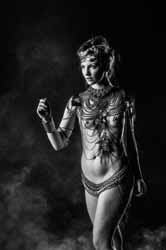 There was little ambient light in the barn and to keep a fast recycle time on the lights I set them to register f11 on both the back and front of Jennie. When working with nude models I always get the lights set first and then invite them onto the set to minimise the time they are standing around. You can mark the spot you want the model to stand so that they don't get closer or further from the lights, thereby spoiling your carefully measured exposure! Use a small marker such as a coin that the model can place their foot on and know they are in the right position.

And so with everything in place it was time to take some pictures. All images shot on Nikon D300 with 70-200mm lens, ISO 200, 1/200s and f11. Shot Raw with Cloudy white balance and toning applied in Photoshop CS6.