It was shot as if it was the last photo shoot I was ever going to do and we made sure that all those images got up bright and early each morning to tell people who they should really be using for their photography. And so to 2011, and the Festival is running again.

On a bright February morning a phone-call arrives from Nicky Hancock on behalf of Bath Future Plus, asking am I interested in repeating my endeavours of the previous year? You know what the answer was because you can see the images in this magazine.

Usually when we undertake fashion shoots, commissioned or personal, we might organise everything from the location, the retailers, the makeup, to even the sandwiches! It's what we do and what we are paid for.

But bless Nicky she organised the retailers, the venue and all the stuff that would take too much time away from a hard-working photographer. Yes me!

I spent a morning making phone-calls to hairstylists, make-up artist, the assistant and model agency, and a shoot was underway. Of course all of these people are already in the little black address book because I have worked with them before and know how good they are. They also know that it will be great fun, a great opportunity to promote themselves and a fabulous opportunity to push their creativity whilst accessing great imagery for their businesses. 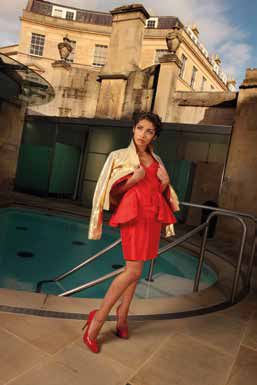 So to the day itself.
The venue was the Thermae Spa in Bath - spectacular and very glamorous.

We are the first ever fashion shoot allowed there.

One catch. The public are allowed in from 9am to use the rooftop pool. The first shots using this particular area have to be styled, taken and the area cleared prior to this time.

Now 5.30am is an uncomfortable time of day for this particular photographer, but when he drags his weary bones to the rooftop, looks out over the steam rising gently from the naturally heated pool and sees the beautiful peach glow of an early sunrise slowly kissing Bath into wakefulness, he feels so much better.

All he needs now is a model

There are 196 days to get ready for The Societies of Photographers Convention and Trade Show at The Novotel London West, Hammersmith ...
which starts on Wednesday 20th January 2021