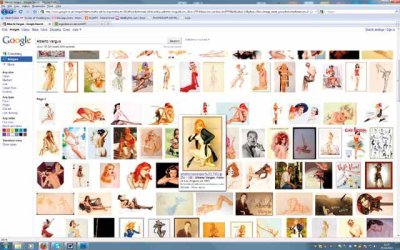 Alberto Vargas was a Peruvian painter (1896-1982) who mainly worked in the medium of airbrush and watercolour. In the 1940s the authorities objected to his pin-up images in Esquire magazine and attempted (successfully) to prevent their distribution by banning the mailing of the magazine. Esquire responded by not using the images. Such prudish behaviour was loosened as a result of the war with its liberating influence and the rising importance of women in both work and public life. The images gradually became more risque and after a freelance break of a few years, Vargas moved to work for Playboy in 1960. Even today the poses are mildly provocative (even though there is a much harder vein of material available from the web). If you trace the development of the images through the issues of the magazines you can see the introduction of ethnic models and the depiction of pubic hair as time passes and a general trend to being more adventurous. Some of the captions, with their double entendres are remarkably trite and cheesy by today's reading. The captions, though, do date the images, in some ways while 'excusing' storylines that are being portrayed. The images, sold as limited edition lithographs, are much sought after and in 2003, Christies sold a Vargas for $71,600. Vargas stopped painting in 1975 after the death of his wife Anna Mae.

They say all trends come around again if you just wait long enough and now is definitely the time for the pin-up again. There isn't a day that passes that I don't see some reference to retro looks or pin-ups in the media. It's everywhere. If it isn't celebrities like Christina Aguilera sporting her blonde bombshell look and doing music videos that celebrate classic pin-up looks from the past, it's magazines doing make-overs of modern-day actresses and transforming them into pin-up girls. Retro clothing is very popular and easily accessible to the public. Even in the local mall we have the Betty Paige Store selling retro clothing that was inspired by the lingerie model of the 30s and 40s. In short, everything retro is definitely in right now!

As a boudoir photographer I am getting more and more requests for retro looks and pin-up portraits. I found the pin-up looks to be a perfect complement to my boudoir portraits. If boudoir is the sexy seductress, then pin-up is the cute girl next door. For those a little reluctant to sport lingerie and garter belts, the sweet and flirty look of a pin-up may feel like a safer option.

Classic pin-ups were made of women with curves. Some would say that Marilyn Monroe was 'the' classic pin-up and today she would be considered a large-size model. Generally the pin-up portrait is a little more covered up than boudoir, so I think it's less intimidating to real women. It's a more subtle, sexy look, more sweet and innocent, more leg and less cleavage. They are a once-in-a-lifetime portrait where the client is transformed through hair, make-up, clothing and props to the look of the past. It's an experience that the clients love!