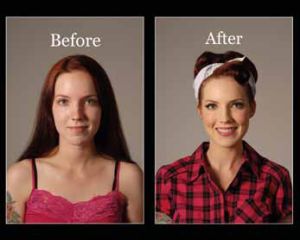 Although there were several styles worn during the 1940s-1950s, when pin-up was originated and at its height, most modern girls have come to associate the style with just a few, key styles. Victory Rolls, aptly named after the popular style worn during World War II, is one of the surest and most recognisable styles of pin-up hair. The pompadour, a style originally for males but adopted by the modern woman, became fashionable with the 21st century girl who wanted a retro pin-up effect without looking theatrical. Searching for images online using key words such as 'rockabilly', 'greaser girl', or 'pin-up' will yield great examples for you to pass along to your hair and make-up artist. Some artists specialise in such styles, while very modern stylists may not be very familiar with the terms. Tear sheets, or your own samples, of a pin-up effect versus a vintage effect are also very helpful in determining what the client wants. Quite often, the 1920s finger waves are confused with pin-up, although there are definitely two different styles. One feels antiquey, with a jazz-bar vibe and typically done in sepia or black and white. The other is bright, perky, and full of colour and life. Hair and make-up is very different for each of these, and clarity on which style your artist is to create is paramount. 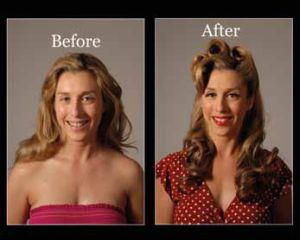 Hair and make-up for pin-up more closely resembles a painting rather than a beauty makeover. It is almost the definitive, direct opposite of modern make-up. The focus is on absolute and total perfection, clean lines, and an almost unrealistic, slight fantasy effect.