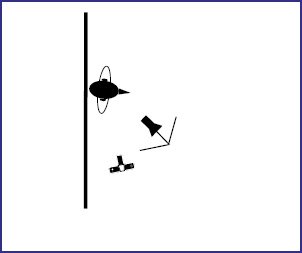 Before I got my coveted beauty dish, I shot almost everything with a simple silver brolly.

I experimented with everything from it being fully open to half closed around the light; sometimes I clipped theatrical gels to it and I started to find out that it was actually rather versatile for such a cheap bit of kit. If I had to pack light this would be what I packed; a single strobe and a silver brolly.

To create this shot I used the silver brolly up high so that it would catch on his muscles as the light fell downwards. I did lose the definition on his abs here, but as it is a sideways shot, you can see them in silhouette so I wasn't too worried. Having the light high and pointing down allows you to highlight other muscles that aren't usually picked out in photographs - the feathery effect below his pec for example where the light plays across his intercostal muscles and the hard shadows highlight the muscles around his waist and bum. 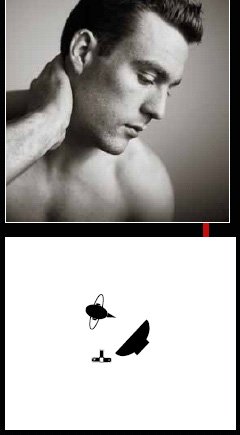 Sometimes it can be good to experiment and use techniques that seem out of place; it can really make an image quite striking. We're not used to seeing studio images that use razor-thin depth of field and the soft, dream-like quality of this shot was created by using a 50mm lens at f1.8. To get this effect you can either use neutral density gels on the lights or a filter on the lens. Each method has its own pros and cons but I decided it was more important to keep the light quality of the beauty dish - the trade-off is a slight degradation in image quality due to the filter on the lens.

The modifier used here is an Elinchrom 70cm silver beauty dish with its 'shower cap' diffuser. It was placed at about 45 degrees and slightly above the model. The diffuser just softened the shadows, but the beauty dish still retains its characteristic ability to carve out depth under the cheekbones and cheeks of just about anyone you point it at.

When purchasing a beauty dish for portraits it's generally considered that 'bigger is better'. A 70cm beauty dish may seem like an extravagant expense, but it's worth every penny for the upgrade over the smaller versions. There is also the debate to be had over silver versus white interior colouring, but the best advice here is to try them out first and see which one you prefer. One thing is for sure though; the cheaper, non-branded versions simply don't compare to the quality of the more expensive beauty dishes. This truly is one modifier where it is worth paying more for a better quality of light.